The Clean Kill: Where to Shoot a Hog

Rifle. Bow. Handgun. Lightsaber. Whatever your choice of weapon when taking on a wild hog, there are a few things to understand about the troublesome, but oh so tasty, beasts.

Most hunters heading into pig killer territory are deer hunters looking for some action in the off-seasons. Which makes perfect sense given that feral hog hunting is allowed in most areas year round! 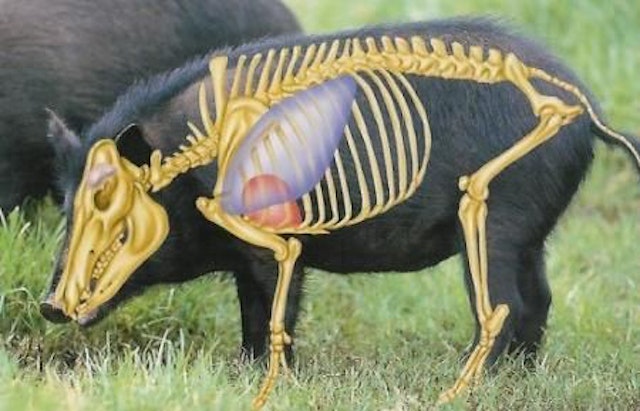 There are many differences to consider when making the game switch for your safety and success.

We start with understanding their anatomy and what can make these pesky son-of-a-guns so tough to kill when you’re new to the hunt.

You can see in the illustration that the heart and lungs are just above the shoulder. Experienced deer hunters might go for a lung shot and end up hitting nothing but gut on a feral hog. Not good.

SO, DO YOU GO FOR VITALS, NECK, OR HEAD?

If you’re new to hog hunting we suggest a broadside attack. Hitting the vitals and shoulder will put the hog down on the spot. This allows a fast follow-up if necessary without having to go trailing after your kill. We always advocate a quick and clean kill. It’s ethical, efficient, and safer for you.

Besides, you don’t really want a big hog with giant tusks coming after you. The neck is another great kill shot. Again, it’s efficient and will put the animal down by severing the spine.

Then, there’s the headshot. Of course, putting a bullet in any animal’s brain will kill the animal. However, note that while feral pigs are smart animals they don’t exactly have big brains. Also there are many stories about hunters thinking they got a good head shot on a wild hog only to have the pig stand up and charge. This, of course, always tends to happen when you’re approaching the animal and you’ve slung your rifle or holstered your gun. Because, Murphy’s Law.

It’s as simple as smaller brain + super thick skull and hide + moving target. The biggest thing you need to be aware of is having the right ammo. You want a bullet that’s heavy enough to penetrate a very tough hide. Look for something with enough diameter to deliver plenty of knockdown power as well. There are enough tales of soft bullets flattening against the shield of a boar online to make your head spin.

Using a lightsaber? We actually don’t have great advice for that. We sent Bob feral hog hunting with a lightsaber and it didn’t end well at all. It’s a shame really. We liked Bob. Mostly. By the way, we’re hiring!

The most important thing is to kill quickly and to be safe!

For additional information & demo's of Hog Hunting techniques and methods, check out our YouTube channel

Why Are Feral Hogs Hard To Hunt?