Recently the folks at LousianaBowhunter.com posted a picture on their Facebook page of a wild hog carrying a fawn in its mouth.

The caption was pretty great. “Wondering what you can do during the off-season? Well, I’ll just leave this here for ya to think about.” 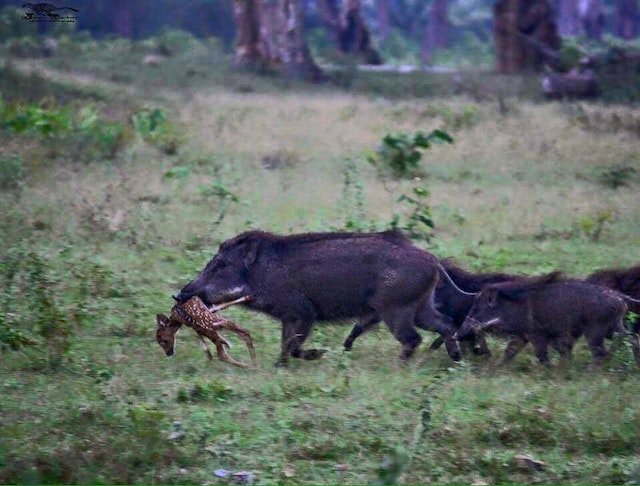 The comments are an interesting mix of reactions from hunters and landowners discussing the wild hog population in various areas affecting the sport of deer hunting. Most people have seen a decrease of deer activity and an increase of feral hog population. It makes sense.

Wild pigs and feral hogs will eat just about anything, including any food sources for deer that should be native to your area. Plus, as they move from area to area they travel in packs and can scare off any deer in the area. Deer don’t migrate the same as hogs and if they leave the land and find another safe haven they’re likely to stay put.

This problem is plaguing lease owners who use their land for deer hunters. The bucks are harder to find than they used to be in some places due to the hogs.

It’s certainly not just an issue in Louisiana. Areas throughout the United States, especially in the southern states, are having issues with feral hog populations increasing. While most of the national coverage discusses the ruining crops and land of farmers and landowners, not much is being said about how it affects lease owners.

As the various hunting seasons come and go it’s good to know that in most states hunting feral hogs is allowed year round. Deer season is over? No problem. There are plenty of hogs to hunt!

When you’re armed with our tactical flashlight kit you’re better equipped to handle feral hogs no matter where they are. Hunting hogs at night is safer and easier. You get a long battery life and the ability to hunt in total darkness with less of a chance of scaring away the wild pigs.

No matter which of our great hog hunting products you use be sure you’re familiar with your state regulations for hog hunting. Be safe and be legal.

The Clean Kill: Where to Shoot a Hog