The feral hog has an arsenal of advantages with respect to behaviors and adaptability that make it challenging quarry for the hunter. To ensure success, the wise hunter needs to understand these advantages and use them against the hog. 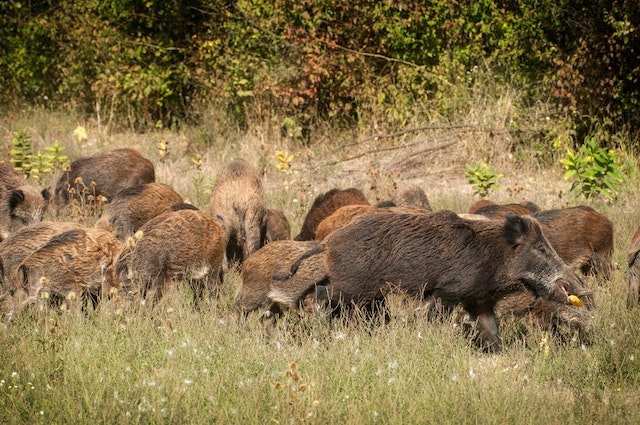 Like domestic animals, the litter size depends upon the sow’s age, nutritional intake, and the time of year. Feral hog litter sizes average 5 to 6 piglets per sow.

In Texas the feral hog population is estimated at 2.6 million and the annual population growth is estimated at 18 -21%. If left unchecked, it will double in 5 years. Hogman Hint: Hunt down as many feral hogs as you can! Entertain the idea of trapping and if you can afford it, use helicopters to hunt.

Omnivore Power: The ability to eat a wide variety of food material gives the feral hog the ability to adapt to almost any environment. Although they love acorns and other mast in woody areas, they will increase their range in times of scarcity and eat a wider range of plant material. They are even capable of attacking and eating small animals such a fawns, calves and goat kids. Hogman Hint: Use acorns and mast in general as bait. Keep small domestic animals protected.

Faster than Usain Bolt: Feral hogs can run up to 30 mph, even faster than Olympic gold medalist Usain Bolt. From his record time of 9.58 s for the 100 m sprint, Usain Bolt’s average ground speed equates to 23.35 mph. Hogman Hint: Always have an exit strategy. You can’t outrun a feral hog.

Razor Sharp Tusks: A scary set of tusks is the element that makes feral hogs so dangerous. The lower tusks tend to be very sharp at the tips, and as such, are used for defending against rival hogs, prey, predators and the occasional hunter (if cornered or startled). The primary function of the upper tusks is to sharpen the lower tusks. Hogman Hint: Stay away from all four tusks!

Biting Power: The jaws of feral hogs are extremely strong, enough to crack open hard-shelled nuts such as acorns, hickory nuts and pecans (mast). When they prey on small animals or scavenge carrion, they can easily break bones and often consume the entire carcass. Hogman Hint: If you hunt with dogs, make sure they wear a cut vest for protection. It is also important that the hunter is trained in advanced first aid for dogs, including how to suture wounds, in case a dog gets too close.

Powerful Nose: Feral hogs possess an extremely well developed sense of smell; in fact, smell is a hog’s best sense. They rely heavily on it to detect danger and seek out food. They can smell some odors 5-7 miles away and can detect odors as many as 25 feet underground! Hogman Hint: Use strongly scented bait (fermented corn; commercial attractants). Use a homemade or commercial scent neutralizer and stay upwind when stalking.

Aggressive & Fearless: Normally, feral hogs prefer to use an avoidance strategy if they sense danger. However, they can get really aggressive if wounded or when encountering a sow with young. Hogman Hint: Use extreme caution when trapping animals or tracking wounded animals. Also avoid piglets, especially if you do not see the sow around. She may charging you from behind at full throttle.

Intelligence: Depending on the source, feral hogs rank from 4th to 10th in list of the top ten most intelligent animals in the world. Hogman Hint: Feral hogs are nocturnal by nature. Hunt at night with covert hunting lights such as Game Alert® that is motion activated and that has minimal to no effect on normal hog behavior.

Above all, hunt smart and safe.

Do you have a hog hunting hint or tale? Tell us about it in the comments section.

The Nocturnal Behavior of Feral Hogs