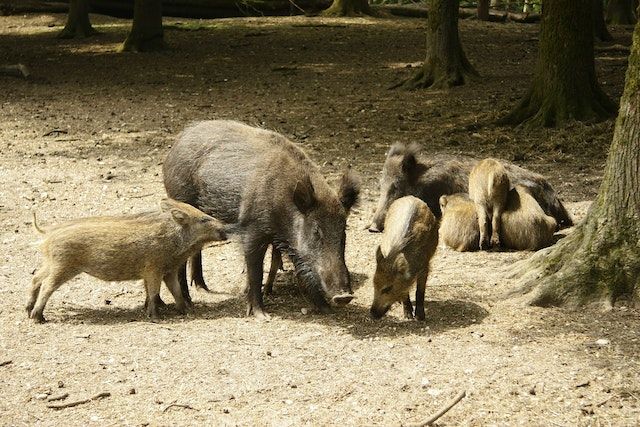 One of the many advantages feral hogs have is their advanced breeding rate, which allows them to increase population sizes in as little as four months. Unlike many animals which adhere to seasonal breeding, wild hogs, like humans, breed year-round, and piglets can be born at any time of the year, although births tend to peak in the spring and fall. A sow is capable of breeding at 6 months, and can have 2 litters a year. A litter consists of any number from 1 to a dozen piglets, although litters average 5 to 6 piglets per sow. The ability of hogs to begin breeding at a young age, breed year-round, and breed rapidly, all contribute to the growing feral hog population.

Once the “single working mom” sow has given birth, she is extremely protective of her offspring. Boars (mature male hogs) are the “deadbeat dads” in this relationship: while they mate with sows in any season, often competing with one another for the opportunity, they do not stay to perform any familial duties. Because of this, sows often travel together in “maternal family groups” which are referred to as “drifts” or “sounders.” These groups are extremely protective of their young, particularly the piglets, which are the youngest baby hogs. Sows typically perceive any movement towards the piglets– whether malicious or not – as a threat, and respond accordingly. Watch out!

The rapid breeding rate of feral hogs, coupled with the sow’s reputation for being a fierce protector of her young, all contribute to the increasing wild hog population. However, this maternal instinct is also a weakness hunters can use against the sow; because sows are so protective, using a recorded piglet-in-distress call is a good way to flush a sow out of cover. For maximum advantage during night hunting, take your Hogman Game Alert® Night Hunting Module and LED Field Floodlights with you if you decide to go after mom.

The Hog Wars Battle is Raging in Louisiana