Feral Hog Hunting: How to Take Advantage Of Hog Weaknesses

It’s no secret that feral hogs are hard to take. With an estimated population of 2.6 – 4 million in Texas alone, feral hogs are an invasive species wreaking havoc on native crop and wildlife, and their rapid rate of reproduction, nocturnal nature, and adaptable diet make them a difficult species to slow down. 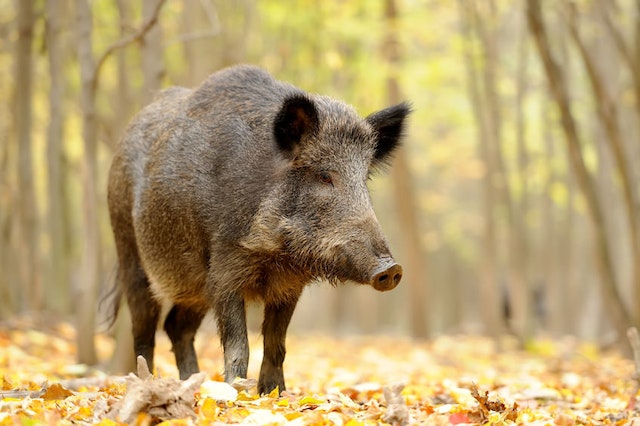 Part of controlling the wild hog population is knowing how to hunt them. In previous articles, we’ve detailed the best way to detect a hog’s presence, and the top things to know when hunting a hog at night. Today we’ll be discussing four prominent weaknesses of feral hogs, and the best ways to take advantage of them on your hunt.

Feral hogs are mean, aggressive creatures with excellent hearing, a keen sense of smell, and the ability to run up to 30mph. These characteristics, among others, make them difficult to hunt. But if you’re up to a challenge – and what hunter isn’t – there are four distinct weaknesses which, when taken advantage of correctly, can lead to a successful hog hunt.

Hogs are creatures of habit. They often use the same trails over and over when navigating to and from food sources or wallows. After determining the presence of a hog – often established by the presence of rooting or hog wallows – a hunter can use observational tactics to determine if the tracks are fresh, and if the trail is worn. If so, it’s a sign that the hog’s hideaway is nearby.

Feral hogs aren’t known for being quiet animals. When feeding and mating, hogs make noticeable, aggressive grunting and squealing sounds. The noisy behavior of hogs easily betrays their location, giving the hunter the advantage. Additionally, their noise can be used against them – using pig calls, particularly of distressed piglets or predator/competitor calls, is an effective way to lure hogs out in to the open.

HOGS THINK WITH THEIR STOMACHS

Probably the biggest weakness of the feral hog is, well – it’s a pig, in every sense of the word. Feral hogs like to “pig out” – they’re always hungry and game for a feeding. It’s easy to use the feral hog’s appetite against them. Hogs readily come to bait, and will often feed for long periods of time, making baiting a surefire way to draw them in to the open. The hog’s repetitive nature comes in to play here as well; once they begin to associate a feeder with a consistent food source, they’re likely to come back to the same feeder over and over. Their omnivore diet can be used against them here – just fill up your feeder with anything from acorns, fruits, nuts, and even homemade feed and you’ll have them coming to you.

Hog’s excel in a number of areas when it comes to their sense – they have a keen sense of smell which allows them to smell odors up to 7 miles away and detect odors as far as 25 feet underground, and an acute sense of hearing. However, their eyesight is fairly poor and underdeveloped compared to their other senses, giving the hunter the advantage over them, especially when hunting at night.

Feral hogs are elusive creatures, and their adaptability, sharp senses, and aggressive natures make them difficult to take. An ideal way to ensure a successful hog hunt is by taking advantage of the hog’s weaknesses. Want more information on how to use the hog’s characteristic to your advantage? Check out our article on hog vulnerabilities, including how to use their mating season against them.

Protect Yourself From Feral Hog Diseases And Brucellosis When Hog Hunting