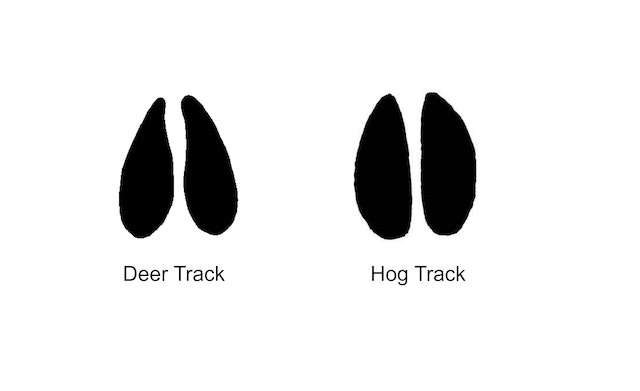 Early detection of feral hogs is critical to landowners looking to minimize the damage done to landscapes and crops, as well as governments seeking to decrease the damage done to native agriculture, livestock, and animal communities. There are a number of signs that can help identify feral hogs, including:

The damage caused by feral hog’s rooting behavior is one of the most recognizable signs of a hog presence. Hogs use their keen sense of smell to locate food which often lies below layers of vegetation, leaves, or litter. Using their noses, feral hogs “root” or dig in search of food, uprooting the turf and soil.

Feral hogs do not have sweat glands, so they resort to “wallowing” in the summer months to cool their body temperature. Hog wallows are created when hogs dig up land near ponds and creeks to gain access to the mud, and are essentially shallow pools of water and mud that often take on the shape of a crescent. You can verify that the wallows were created by hogs by noting other hog signs near the wallows, including hog tracks and scat.

Rubbing, which is closely related to wallowing, is another way to spot feral hogs. After wallowing, hogs will use fixed objects – often trees, fences, or posts – to remove caked-on mud, clay, and dirt, as well as remove parasites. Look for trees or poles plastered in these fluids, or with bark/wood rubbed away.

Feral hog tracks are typically easy to identify, as they typically have a more rounded shape than deer tracks, and tend to be wider. Identifying hog tracks is particularly useful as it allows hunters to detect the direction the hogs are coming from or going to, and possibly find their beds.

Hogs create their beds by clearing vegetation to expose dirt. These beds are typically large, circular holes dug fairly deep in to the ground, and are often covered by thick vegetation.

Feral hog droppings can be difficult to identify, because the hog’s omnivore diet causes the scat to take on different shapes and sizes depending on the location and the type of food available. Typically, scat is cylindrical in shape and dark in coloring, and can look similar to droppings of dogs.

Identifying feral hogs before their population grows out of control is vital to developing management strategies. Once the location of hogs has been identified, the next step is eradication. Currently, there are no products registered for use as toxicants for feral hog control, and landowners have increasingly turned to night hog hunting in order to protect their land and the native wildlife.

Night hog hunting is best accomplished with the use of specialized equipment and gear. The Hogman Outdoors Game Alert® Night Hunting Module is designed specifically to give an advantage during night hog hunting, without disturbing game behavior.