The Impact Of Feral Hogs On Deer

The rapidly increasing population of feral hogs in Texas presents a number of problems for land and livestock owners, as well as for the environment itself. In addition to the damage rooting hogs cause to the land, their presence poses a threat to the natural wildlife of the state, particularly the white-tailed deer population. 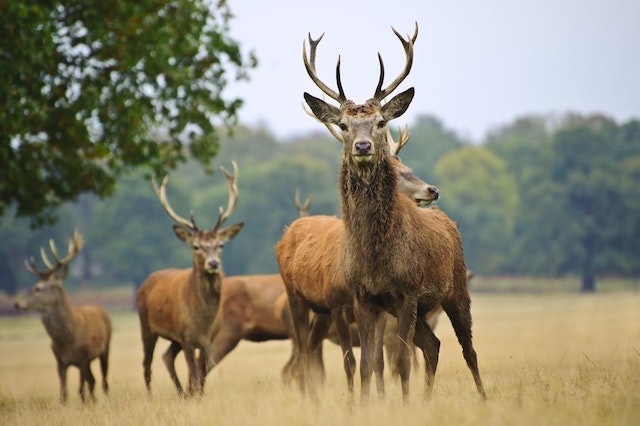 Feral hogs have a dietary overlap with several wildlife species native to Texas, including deer. As such, deer are forced to compete with hogs for food, particularly acorns, corn, fruit/nuts, and oak mast. Hogs have a competitive advantage over deer when it comes to scavenging, because of their keen sense of smell, innately aggressive nature, and omnivore diet.

Hogs have a well-documented sense of smell, which gives them an innate advantage when scavenging for food. They can root through leaves and litter on the ground to get every last acorn. In this way, hogs are able to more completely deplete an area of food than deer, who feed primarily by sight. Hogs are also able to use their tusks to root for food, an advantage deer do not have. Additionally, hogs are omnivorous, enabling them to switch to other food items once the deer’s food source has been consumed. This can leave deer without the needed food for nutrition and survival, which is particularly disconcerting in winter months.

Hogs are known to be aggressive, a characteristic which gives them an advantage over deer, a species known for their more docile nature. Hogs are also armed with four tusks, which can greatly injure deer in a struggle. The aggressive behavior demonstrated by hogs can cause deer to avoid known feeding spots entirely; the Texas Animal Damage Control Services (TADCS) receives reports annually from deer hunting operations that not only are feral hogs eating corn placed for deer at automatic feeders, their activities are causing the deer to avoid the feeders. This can have a lasting effect: if deer begin to associate a feeding spot with feral hogs, they will abandon the source altogether, limiting their available food sources.

In addition to restricting food sources, wild hogs have the potential to carry several diseases which can be threatening to deer, including pseudorabies, brucellosis, leptospirosis, hog cholera, tuberculosis, bubonic plague, and anthrax. As hogs tend to occupy the same habitat as deer, eat in similar areas, and bathe themselves in deer watering holes, these potentially life-threatening diseases have the possibility to spread.

Perhaps the worst threat feral hogs pose to deer comes in a threat to their young. Hogs are known for preying on fawns. Because of the lean stature and docile nature of the deer, they have no means with to defend against a hog attack: hogs have the size, tusks, and surly nature that give them an advantage. Often times, hogs will use their sense of smell to locate birthing grounds, where they manage to secure the newborn fawn before its mother has accounted for it. If this continues, it could greatly impact the deer population.

If the hog population is not able to be contained, it will continue increasing, a possibility which poses a significant threat to the deer population in Texas, as well as the land and environment as a whole.

Currently, there are no products registered for use as toxicants for feral hog control. One way landowners have taken up in an attempt to control the hog population, and protect their land and the native wildlife, is through hunting. Although white-tailed deer are currently the most popular animal to hunt throughout North America, hog hunting has been increasing in popularity, particularly in Texas, where the feral hog population is exponentially rising. As hog hunting has increased in popularity, hogs have become increasingly nocturnal, leading to night hunting. (For maximum advantage during night hunting, take your Hogman Game Alert® Night Hunting Module and Flood Lights with you if you decide to go.)

The Hog Wars Battle is Raging in Louisiana